Start MPLAB X, then click on the Open Project

icon on the main toolbar.

Navigate to the folder where you saved the exercise files for this class.

button. This will build and send the program to the simulator to begin the simulation.

Wait for the UART 1 Output window to finish printing.

button. This will stop execution so that we may examine the variables and their values.

Just like the last lab, we took a pre-configured project and compiled its code. The program creates two constants. One constant is declared using the const keyword and the other is declared using the #define compiler directive. The constant declared with const will be placed in program memory as a “constant variable.” The constant declared with #define however, requires no memory whatsoever, and we will see this in MPLAB X as we look at the Watches window and the Program Memory View.

The code really does very little and is described below. 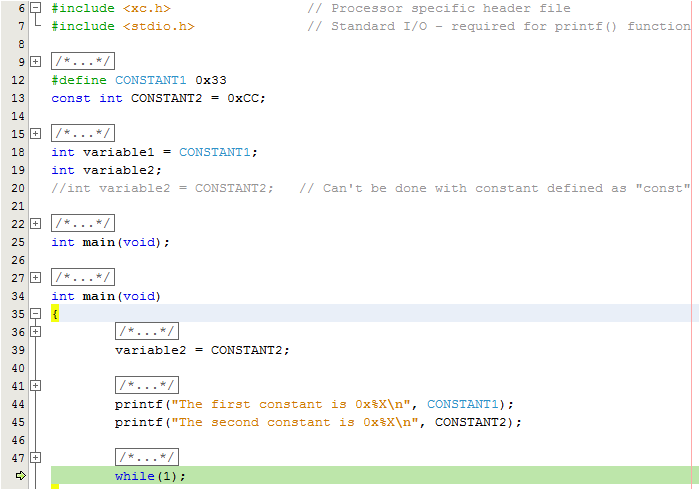 Line 18
A variable called variable1 is declared and initialized with the value of CONSTANT1.

Line 19
A variable called variable2 is declared, but we cannot initialize it with CONSTANT2 because a variable may not be initialized at declaration with another variable. CONSTANT2 is a constant variable (a variable whose value may not be changed in code), and therefore it may not be used in this case.

Line 39
Now that we are into executable code, we can now assign the value of the constant variable CONSTANT2 to the variable variable2.

Lines 44-45
These lines simply print out the value of the two constants to the UART 1 Output window.

The UART 1 Output window should show the text that is output by the program, indicating the values of the two symbolic constants in the code. 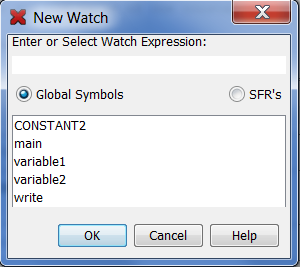 Attempt to add CONSTANT1 and CONSTANT2 to the Watch list.

Only CONSTANT2 appears on the list of Global Symbols to be added to the Watches window. This is because only CONSTANT2 has an address in physical memory.

Scroll down to the address listed from the Watches window (this example uses 0xE72). Observe CONSTANT2 occupies an address. CONSTANT1 does not appear anywhere in the Program Memory.

End the Simulation Session by clicking the Finish Debugger Session

Then close the Project by right-clicking on Lab02 from the Projects window and then selecting Close.