< Back to Lab Start

This issue could be caused by network settings preventing the virtual machine from communicating with the SOM1-EK. Try doing the following to double-check.

Issue 2 – Host Key Verification Failed When Trying to Use scp

You may encounter the error shown in Figure 1 when trying to use scp.

To get around this, try executing the following command before using scp again in Step 5:

This error is likely due to the PAC193x driver not initializing to the iio:device1 node.

It is likely that spidev did not initialize to the spidev1.0 node as defined in the C source code.

Nothing happens when running the following command:

Issue 6 – Device or Resource is Busy, or the C Demo Showed Gibberish Display in OLED Click.

When you try to switch between running the C demo and Python demo, in C, the OLED Click shows gibberish on the display and in Python, a Device or Resource is Busy error appears.

Generally, when the Buildroot make command returns an error, a prior error can help us understand the underlying cause of the issue. 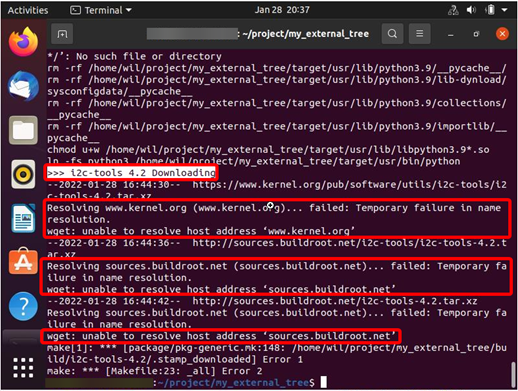 < Back to Lab Start